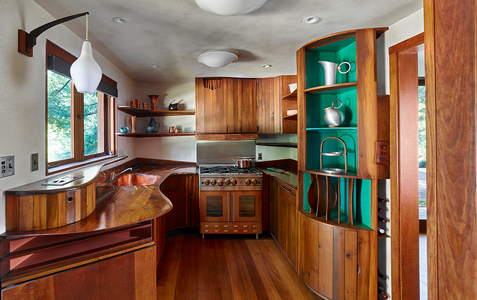 After being named to the inaugural class of the Chestnut Hill Architectural Hall of Fame in November, Louis I. Kahn's Margaret Esherick House was recognized with a Chestnut Hill Historical Society Preservation Award at a ceremony 10 January 2016.

Exemplifying spatial clarity and the hallmarks of pure geometry and materiality that would come to define his larger commissions, Kahn's Margaret Esherick House (1959-1961) represents one of only nine houses he designed. Characterized by clarity of form - Kahn's early iteration of servant and served spaces - and materials - natural concrete and Apitong wood - the house is a 2,500-sf jewel box with walls of windows, built-in shelves, and reading nooks built for single bookseller Margaret Esherick. The house features the only intact kitchen in a private home by famed sculptor and woodworker Wharton Esherick, Margaret's uncle. The Esherick House is an AIA Philadelphia Landmark Building (1992), listed on the Philadelphia Registry of Historic Places, and an inaugural entry into Chestnut Hill's Architectural Hall of Fame (2015).

The current owners and a design and construction team including k YODER design collaborated to ensure continued stewardship of the Esherick House as an important example of Kahn's work and to improve its livability as a 21st century home. New interventions maintain the rigor of servant and served spaces, complement - rather than replicate - aesthetic details, and refine elements not intrinsic to Kahn's vision.